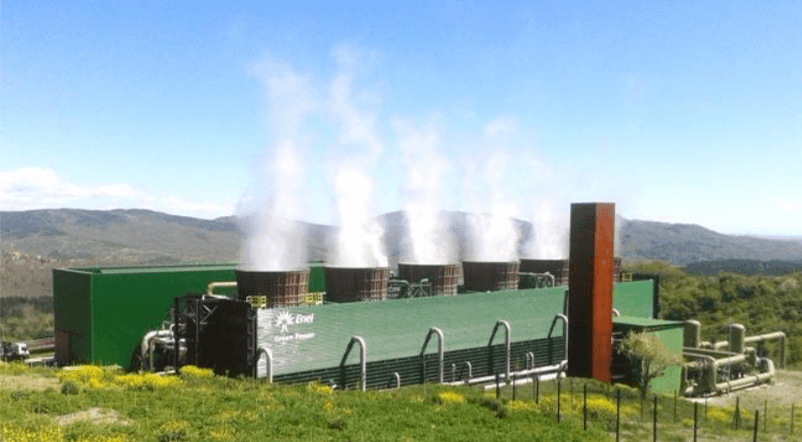 Enel Green Power is one of the major key account clients of Marly in the energy market segment.
In the European biggest district of geothermal power stations, located in the Tuscany region, Marly is providing its products to be used in various steps of electricity production obtained by ground steam.
To prevent the emission of polluted substances in the air, before entering in the turbines production circuit , the steam is treated to be cleaned from its exhausting elements (mercury and sulphates).
A special process called AMIS is used to clean the ground steam, in this system Marly end- suction pumps CAX line are used to handle very aggressive liquid and superheated water with temperatures reaching up to 180°C.
Next picture shows a geothermal power plant located on Amiata Mountain where several of them are producing electricity exploiting the ground natural steam.

One of the main process in geothermal energy production is the AMIS steam-washing phase. Enel developed and patented this process in order to clean the ground steam from mercury and hydrogen sulphide (caustic soda) granting no pollution because of the very low exhaust emissions and consequently very low impact effect to the environment. The so-called AMIS system is a very sophisticate process, which is able to reduce the mercury and hydrogen sulphide content up to 95%.
The key phase is the process consist in pumping a hot mixture of water and sodium hydroxide (caustic soda) into special pressurized filters tanks.
This operation is made through a horizontal end-suction Marly pump of CAX series. 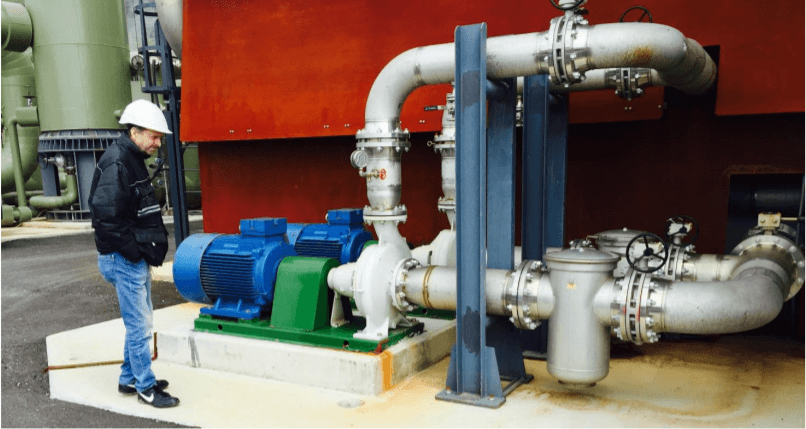 In this system, a main pump model 4CAX 150-400A works to feed the filters.
The pump performance duty at full process flow is 450m3/h at 45m head at a pump speed of 1450 rpm, driven by a 90Kw electric motor.
The pump is made of stainless steel class AISI316 in order to stand the very chemical aggressive effect of the pumped liquid.
Special mechanical seal is used to grant the shaft sealing when the fluid is carrying solids and chemicals, and when the caustic soda produces the crystals on the shutdown phases. The shaft is protected with a AISI316 Sleeve in order to avoid in the seal area any shaft corrosion and leaking and on parallel to reduce the maintenance costs.
Special material on wear ring elements is applied on the front and on the back of impeller, thus preventing the main flow of solid from going in the seal chamber area.
The electric motor is oversized to hold the high density and viscosity of the mixture fluid of water and sodium hydroxide.
Radial ball type pump bearings, located in the oil chamber bracket , are lubricated by oil to secure a long life and low temperature; while a level oiler and a temperature meter are used to monitor the bearing status and maintenance time. 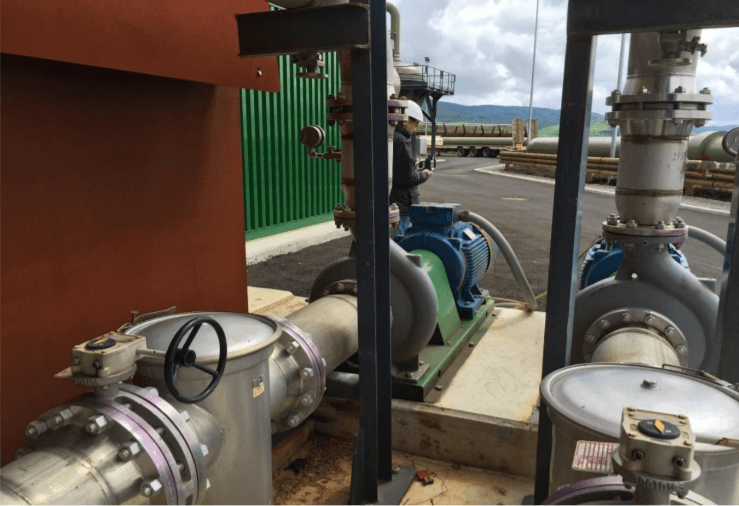 A secondary feeding pump is used to boost the overheated geothermal water at the temperature of 180°C into the AMIS filter.
In this phase the horizontal end-suction pump model is CAX 40-250B, the pump performance is 30m3/h at 80m delivered head at a pump speed of 2950 rpm; the electric motor 18,5 kW power is oversized to hold the liquid density.
To keep the water liquid at 180°C the fluid has to be pressurized at pump inlet at 13 Bar, thus resulting a total pressure of 21 bar at the delivery pump flange.
To fully satisfy this heavy duty application, Marly has developed a special end-suction execution pump with an elongated seal chamber composed by an external seal cooling and an integrated cooling fan system that ensure the air-flow passage along the seal chamber housing.
Here below a sectional drawing of this special pump execution for high-temperature which shows the special seal area design. 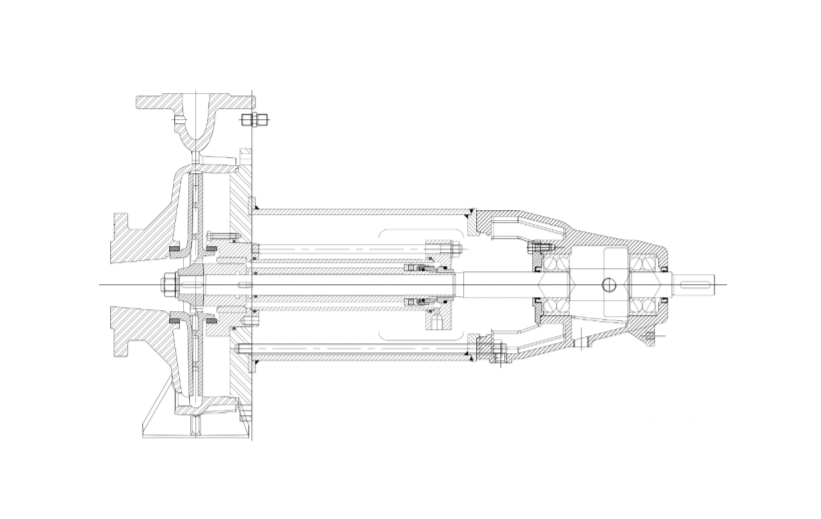